Visiting New Zealand? To really understand the country, learn about the indigenous Maori people who came to New Zealand over 700 years ago, bringing with them Polynesian customs and traditions. From striking tattoos to carvings, underground cooking methods, legends and the haka war dance, here’s an introduction to Maori culture and where to experience it in New Zealand. 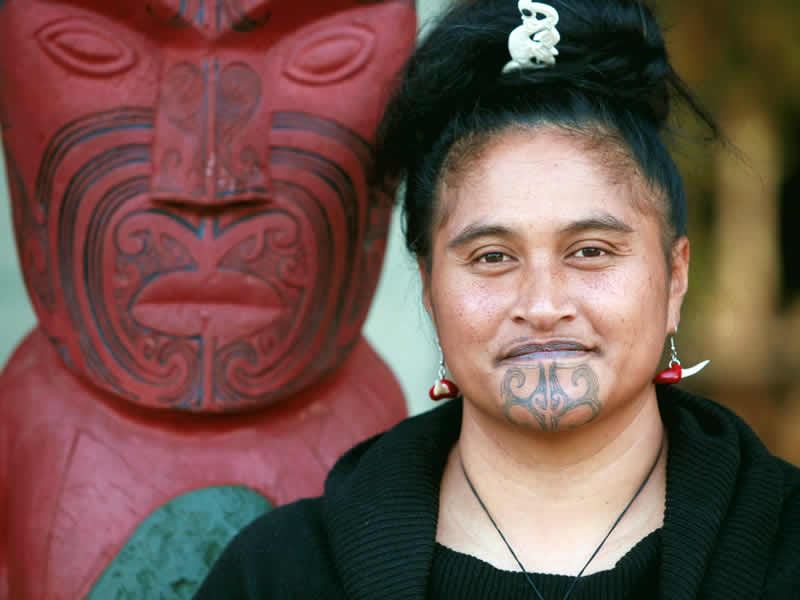 The origins of Maori culture

The Maori people of New Zealand, also known as the Tangata Whenua, hail from Hawaiki, a far-flung, mythical island in Eastern Polynesia. In the 13th century, they travelled across the ocean by wooden canoe to settle in what they christened Aotearoa: ‘the land of the long white cloud’. In 1840, Maori culture blended with colonial influences when Maori chiefs and the British crown signed the Treaty of Waitangi. 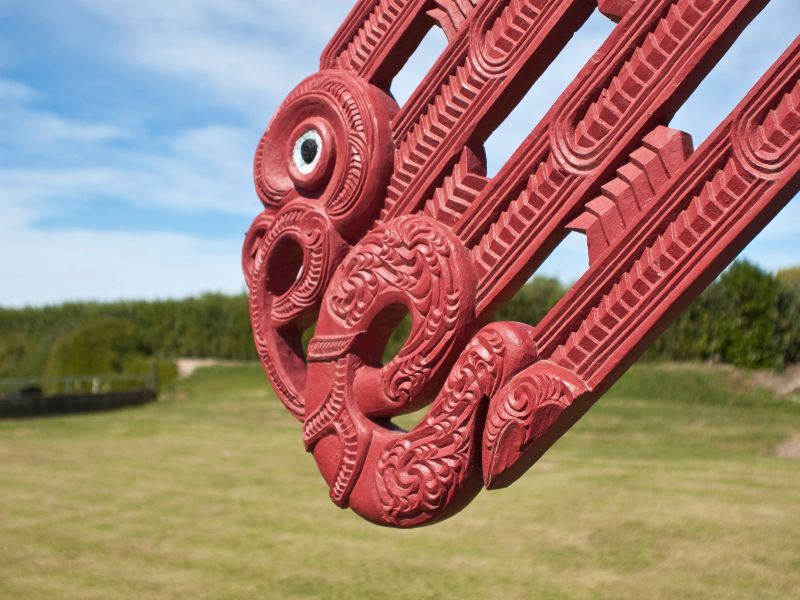 Today, Maori culture remains an important part of the Kiwi identity. Maori people make up around 15 percent of the population, that’s almost 600,000 people, according to a 2013 census. Most are based in the North Island, particularly around Auckland, the Bay of Plenty and Waikato. Since the 1980s, there’s been a revival of Maori language programmes, as well as immersive tourism experiences that strive to preserve and celebrate this vibrant culture.

What exactly is Maori culture?

Maori people define themselves by their extended family tribe, whanau, and observe ancient beliefs and traditions handed down from their ancestors. Here are some of the hallmarks of Maori culture.

Each tribe has a communal complex of ornately-carved buildings, known as the marae. This sacred space is where people gather for celebrations, traditional ceremonies and to mark events. The main building is the meeting house, the wharenui, but there’s also an outdoor space, dining hall and bathroom block. People don’t live in the marae permanently, but stay during special occasions. 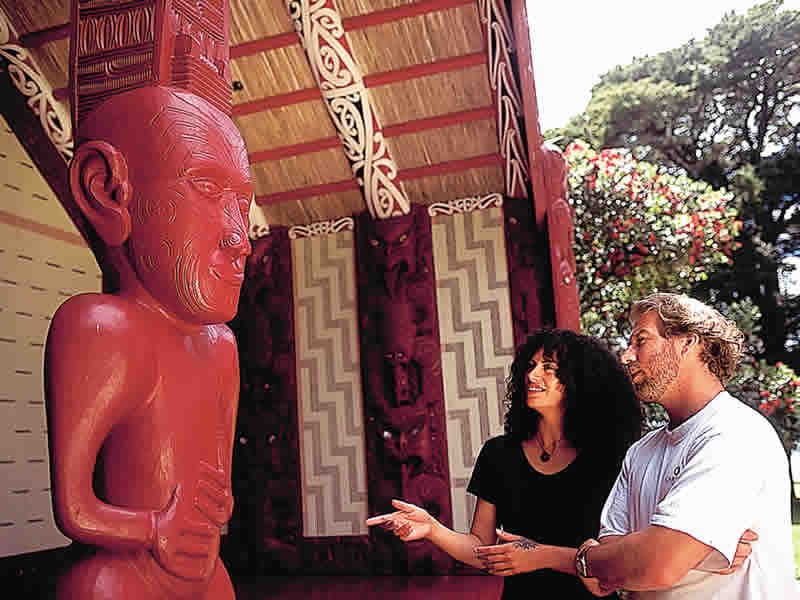 Maori people have their own language, which was originally never written, but has been passed down orally through the generations. Te Reo is spoken by under four percent of New Zealanders and is kept alive through language programmes like Kohanga Reo, a kindergarten where lessons are given in Maori. When travelling in New Zealand, you’ll notice many Maori place names and may be greeted with phrases like Kia Ora (hello) and Haere Mai (welcome). There’s even a Maori TV station

Maori culture is rich with myths and legends, passed on by elders through stories which aim to teach tribal beliefs. Visitors may have the chance to hear some of these tales during Maori tourism experiences. Some of the most popular include the love story of Hinemoa and Tutanekai and the legend of Paikea the Whale Rider (now a well-known book and film), who travelled to New Zealand on the back of Tohora the whale.

The most famous Maori legend though is that of the mischievous god Maui. In this creation story, Maui stowed away on his brother’s boat to join a fishing trip, during which he managed to catch the North Island on his hook. In fact, if you look at a map of New Zealand you’ll see the island is shaped like a fish, with Wellington harbour as the mouth and the northern tip the tail. The South Island is said to be Maui’s canoe, with its anchor being Stewart Island.

Maori people practise a Polynesian underground cooking method, hangi. This involves an earth oven comprised of hot stones, which are placed in a pit and topped by wet sacking. Covered food is placed on top and submerged with earth to trap the heat, cooking food over a few hours. Typically, hangi feasts include root vegetables like sweet potato, as well as fish or chicken which emerges with a smoky, earthy flavour. 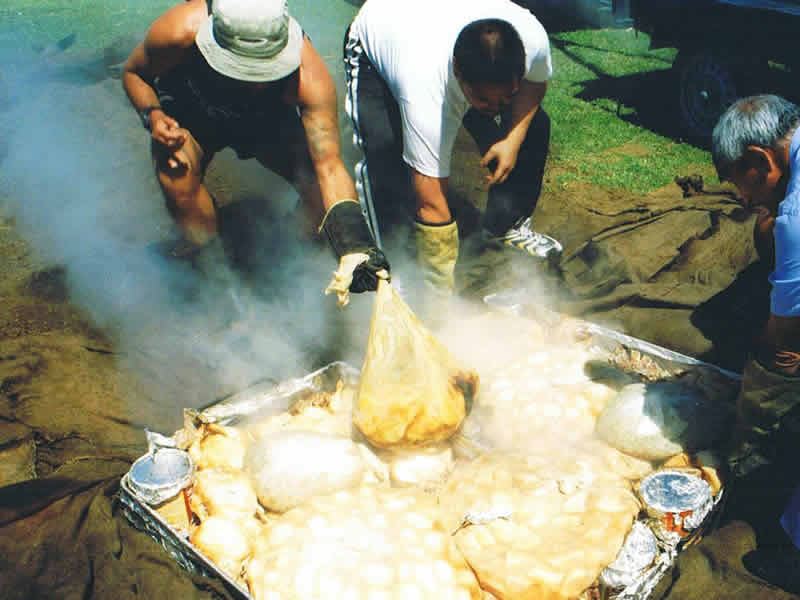 Maori history and legends are often told through intricate artworks such as paintings, weavings and carvings. These skills and their original methods have been carefully preserved and today include other modern media such as film, theatre and TV. One of the most visible Maori art forms is ta moko, the tattoo. These black tribal markings symbolise an individual’s ancestry, history and social status. Tattoos are often applied to the most sacred part of the body, the head, usually the face for men and women’s lips and chins. 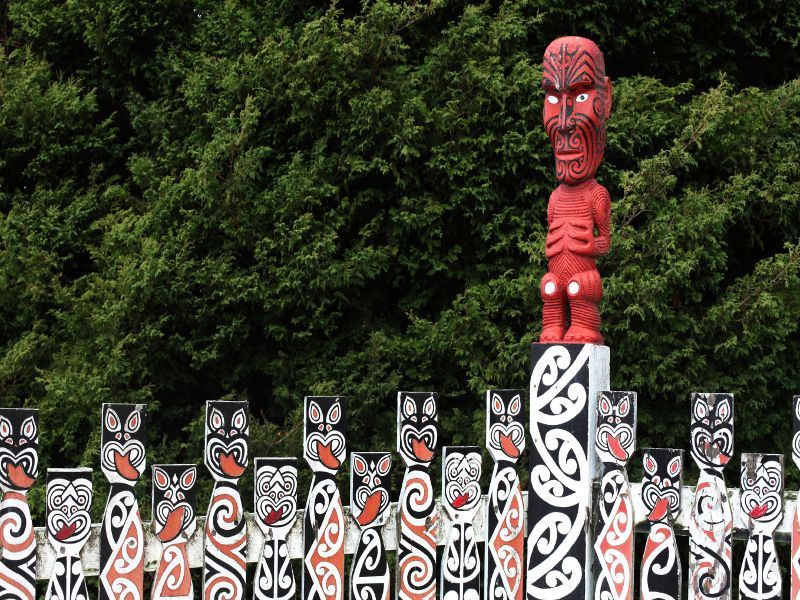 Maori dance – the Haka and Poi

Dance is used to tell Maori stories and forms an important part of many ceremonies. The poi is a dance often performed by women using a ball on a chord, a poi, which is twirled in unison as the group dances and chants. It’s the dramatic haka that has become the most iconic hallmark of Maori culture though, made famous by the All Blacks rugby team, who perform it to intimidate their opponents. 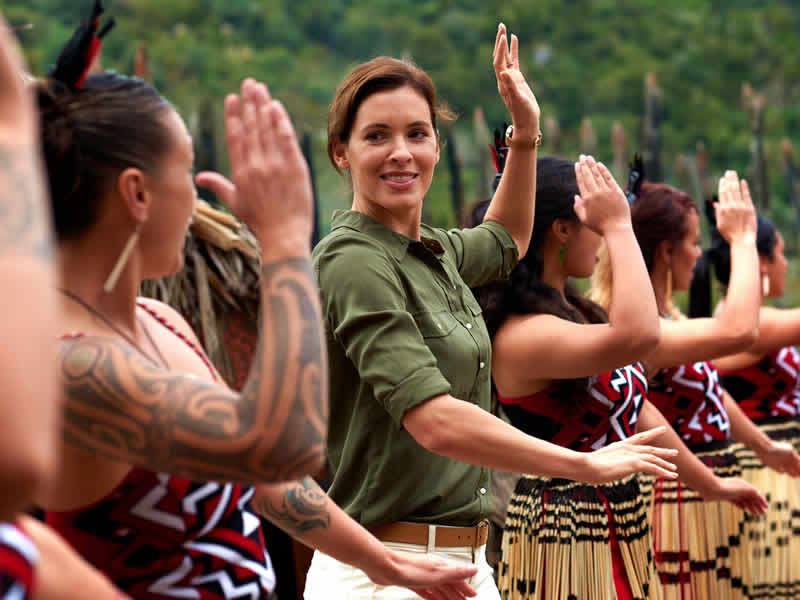 The haka has developed a reputation as a war dance, having been used on the battlefield and performed with weapons.  It’s thought that hakas were used during the first encounters with European settlers but the dance also has mythological roots. One story is of chief Tinirau, who sent a female hunting party to track down a priest called Kae, who killed his pet whale. The women performed the haka to force a smile from the village men so they could identify Kae by his distinctive overlapping teeth.

Nowadays, the Haka is intended to show a tribe’s strength and unity. The theatrical display involves loud chanting, body slapping, hand fluttering, stamping and fierce facial expressions with protruding tongues and eyes. The Haka is used to honour guests and is an internationally-recognised expression of Maori and New Zealand culture - the army even has its own version. 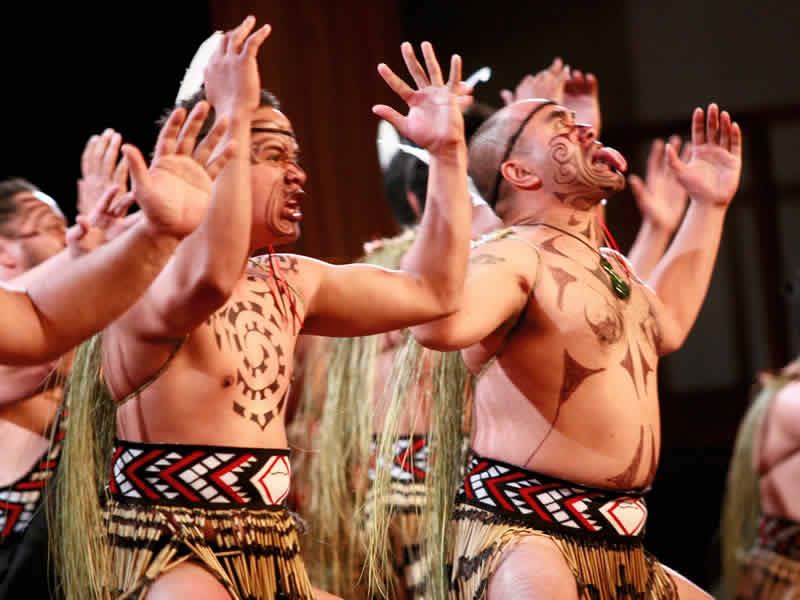 Want to experience Maori culture for yourself? Organised tours throughout New Zealand offer a visit to a real marae, where you’ll be welcomed with a powhiri ceremony and must present a gift to the host. This ceremony usually involves being challenged by a Maori warrior who lays down a branch, which you must pick up to symbolise peaceful intentions. The female members of the tribe will then perform a karanga chant and teach you how to respond.

The formal welcome is completed with speeches and a hongi, a distinctive Maori custom that involves pressing the nose and forehead together to exchange the ha – breath of life. Most Maori experiences continue with storytelling, a tour of the marae, demonstrations of dance, carving, weaving and weaponry. You’ll also get to eat a hangi meal and may be able to paddle in a canoe or watch a tattoo demonstration. 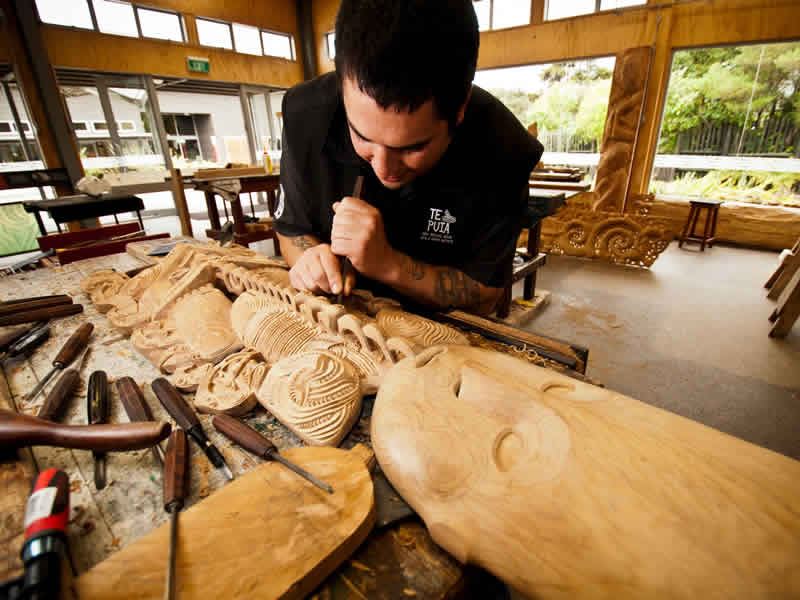 Many Maori tourist experiences take place in the North Island, especially around Auckland, Northland and Rotorua. Build one of these tours into your New Zealand travel plans, you can find itinerary ideas in our The Winterless North, Grand New Zealand and North Island Highlights with Scenic Train self-drive tours. Here are some of the top options:

During your trip to New Zealand, be sure to visit important Maori sites like the Waitangi Treaty Grounds and Tongariro National Park, which has been listed by UNESCO for its Maori spiritual and cultural values. You may also come across reconstructions of pre-European settlements, especially in the North Island. A popular one is Rewa’s Village in Kerikeri, a replica Maori fishing village which you can explore on a self-guided tour. 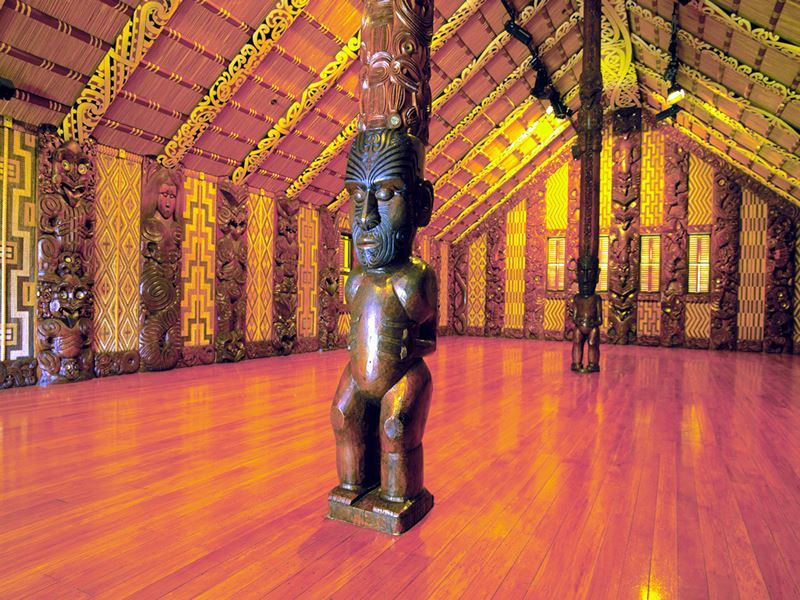 New Zealand is also home to some world-class museums where you can learn about Maori culture in a less performative setting. The Auckland Museum boasts the largest collection of Maori artefacts in the world, including a canoe, meeting house, weapons and costumes. Located an hour from Christchurch, the Okains Bay Maori and Colonial Museum also tells the story of Maori life and European settlement, while the Te Papa Museum in Wellington is home to Maori objects such as clothes, weapons and carvings.