Nigel & Dorothy travelled to New Zealand where they did the Length & Breadth of New Zealand Self-Drive. Here's what they had to say: 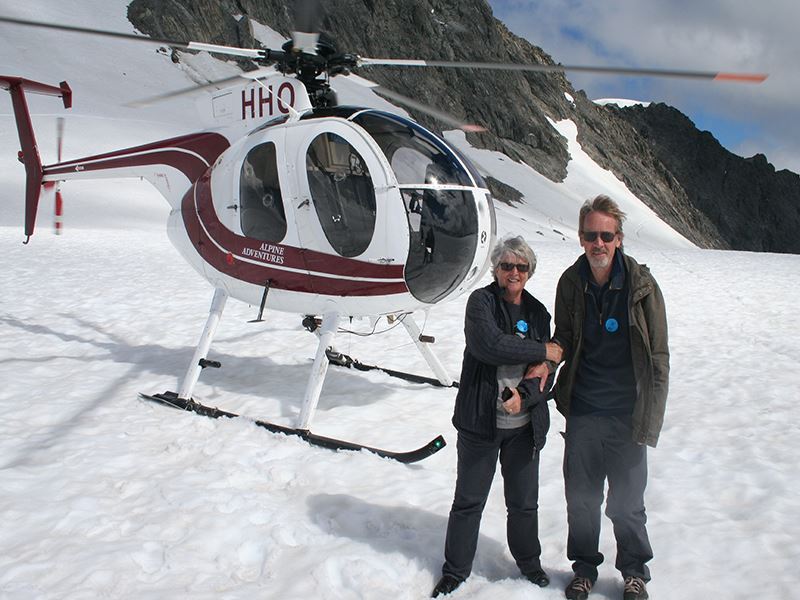 I didn’t really want to go to New Zealand at first.  People had told me the country is like the UK 50 years ago, and no matter how much fun I’d had on the beaches of the West Country with a bucket and spade (and if lucky, flags), I had now seen jungles, mountains and deserts and met people with completely different cultures in places such as Kenya, Borneo and Sydney. But, when my wife gave me the itinerary of a fly drive tour I was hooked: fjords, hot springs and glaciers. OK, and wine tasting, golf and ODI World Cup. Maybe, in retrospect, the cricket was a mistake.

So, we booked a fly drive holiday for February that would take in both islands and see the recommended sights. Driving times were up to 4 or 5 hours, but driving on quiet and often empty roads with beautiful scenery was easy.  Most of the stops were planned for two nights which gave enough time to explore each place.

Picking up our car was especially good when it turned out to be a BMW hatchback, and with the sat nav giving instructions we headed for places that sounded exotic: Paihia, Bay of Islands and Waitangi. On the way, we used one of New Zealand’s toll roads for the first time. You can either pre-pay or go on line and pay later. 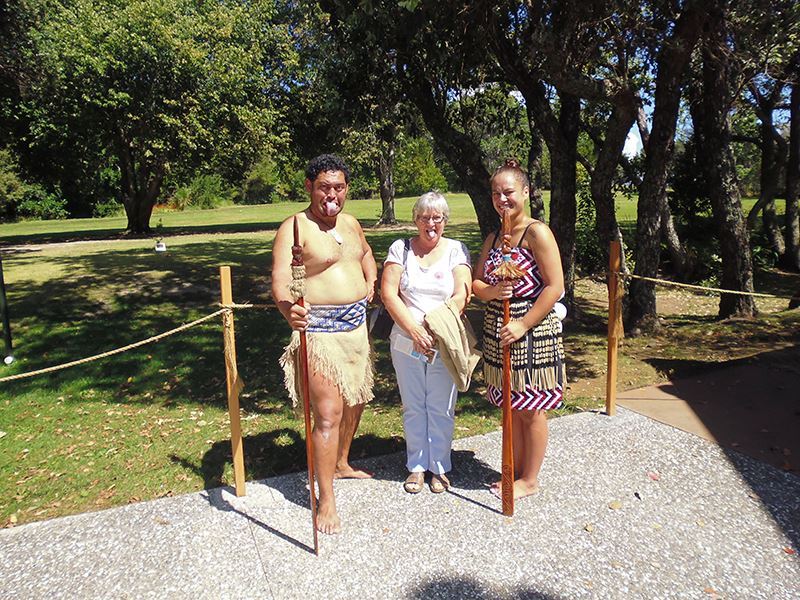 Waitangi is the perfect place to start the tour, as it puts the life of the people in context and begins to lead you into the cultures of these two islands. I had seen a Haka performed on television before, but here we sat while they shouted, blazed their eyes and waggled their tongues at us. I assumed it was an ancient, probably spiritual chant but watching a TV programme we later found out that new Hakas are always being made up and some of them could be quite crude. They may have been screaming anything at us. The scenery here is beautiful. We also took a short boat trip across to Russell and looked at the islands from the other side, and the view was still beautiful.

We drove west from the Bay of Islands, stopping to see the absolutely stunning views of the Hokianga estuary.  We followed a path to view the Tasman Sea which was a rough and windy contrast to the calm estuary.  It is one of those spots where amateur photographers like me find it hard to capture the breath-taking 360-degree panorama so I clicked away continually during the hour’s walk gaining at least an impression of some of the views.  Our route planner advised us to stop to view the huge Kauri trees and especially the largest of all the trees Tane Mahuta. Huge and very old in a beautiful, peaceful forest. 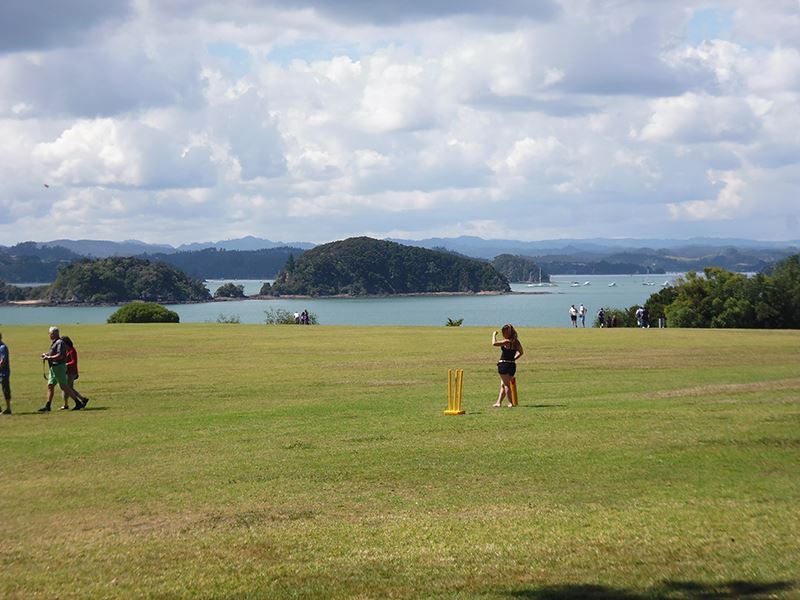 Rotorua smells, our daughter had warned us. But I’d heard it was also beautiful and, surprisingly, it was.  The smells come from sulphur escaping continuously across a wide area in this volcanic region but the walk around a geothermal park with colourful, bubbling pools and steam clouds had a unique and haunting beauty.  We also visited the Lady Knox Geyser, which is persuaded to erupt by introduction of (environmentally friendly) soap sending an amazing jet of steam and water 10m-20m into the air.  It can last quite a long time and we got talking to an American couple and the man was staggered by the number of sheep he’d seen. “Millions”, he said. “Millions and millions.” 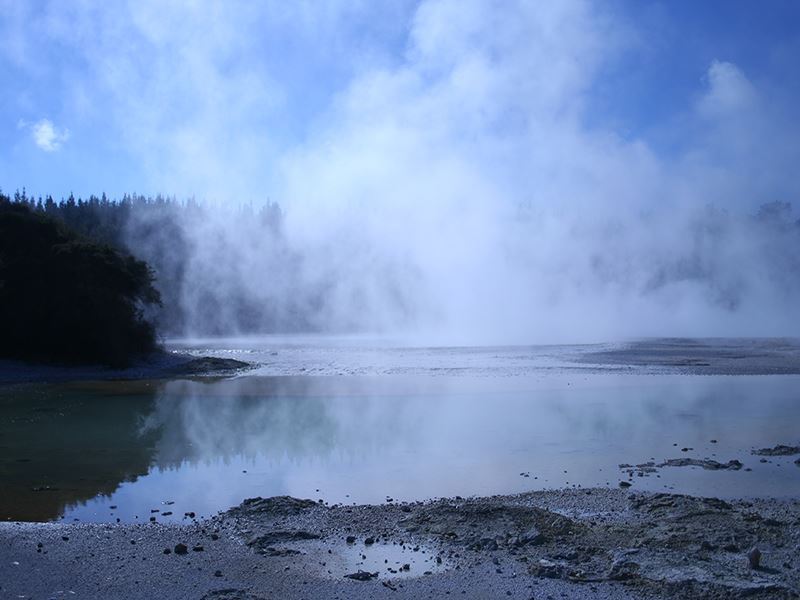 There is the opportunity in this area to visit the Hobbit Movie set and farm tours.  At the time, it seemed a very expensive tour and we weren’t persuaded that it would be worth it.  But Mount Doom (Mt Ngauruhoe) was calling, although we drove past at a safe distance. Our visit to Wellington should have been the most humiliating experience as Brendan McCullum almost single handily destroyed the England cricket team.  But the atmosphere and banter in the stadium was almost enjoyable. The sun was shining and Wellington has a beautiful harbour with cafes and bars where it was easy to realise that these people and the views of this country was something special. We took the ferry across the Cook Straits to Picton which had great views, before heading to Blenheim for an excellent wine tour. We also stopped in Kaikoura, where we walked along the coast and saw a seal lying on the rocks, before we made our way to Christchurch for some more cricket. 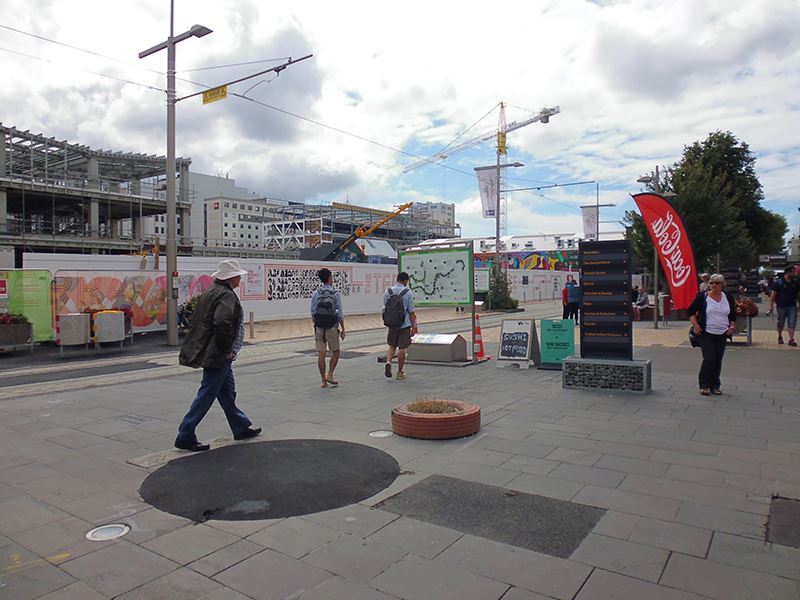 I wasn’t prepared for Christchurch. I knew there had been major earthquakes but was staggered seeing the emptiness and destruction in the city centre. We learnt from the museum and chatting later to the taxi driver how much the population in the suburbs had suffered as well, losing homes, struggling with insurance and many other problems. The lakes we passed as we drove south are impossibly blue, and when we looked out across Lake Pukaki, we had the stunning view of the Southern Alps and Mount Cook.  This area was also used a great deal for filming Lord of the Rings so as we shifted a ring on our finger we moved from 2015 to Middle Earth and back, which can be quite dangerous when driving. 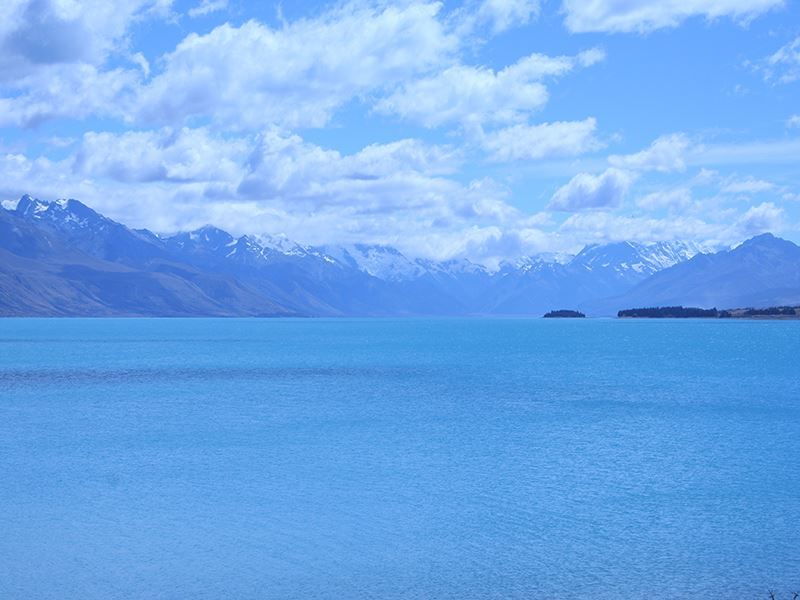 The Octagon in the centre of Dunedin was described in our guide book as having a collection of ‘funky cafes and bars’.  We headed there for a meal and enjoyed the outdoor eating and people watching, still unsure about what made it funky or what that actually means. We booked a tour in the beer factory where the guide considered himself the wittiest man in Dunedin, but of course, we were all most interested in the tasting session at the end.  The tasting session finished all too quickly and we looked forward to our visit of a chocolate factory. For viewing wildlife, the Otago Peninsula is said to be one of the best, however as I’m not so into wildlife I hadn’t done enough research to really see the animals. If you are a wildlife enthusiast though, it’s a must see. I’d never seen albatrosses and they were around, but without binoculars and the help of a guide on one of the boat trips we couldn’t be sure.  The seals were out most of the day catching fish, and there’s a 90-minute tour to hides where you may see penguins, but most likely later in the day when they return. 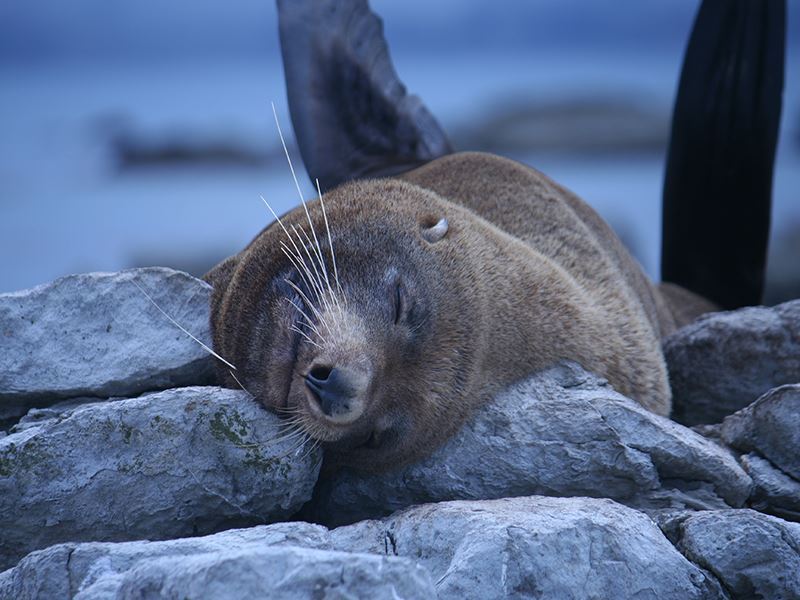 The drive to Milford was hard for me as I don’t like heights at the best of times, so with twisting, narrow roads I couldn’t take my hands off the steering wheel.  The views on the way were wonderful and we were lucky that we had left early as we were able to go through the single-track tunnel almost straight away. The cruise along the fjord, with waterfalls cascading down the mountains on either side, was amazing. When the rain started, as it often did here, we put on our cagoules and continued to enjoy the journey towards Milford Sound, especially as a guide gave an interesting commentary on wildlife and geographical features.  It is best to go as early as possible: less people, less mosquitoes. 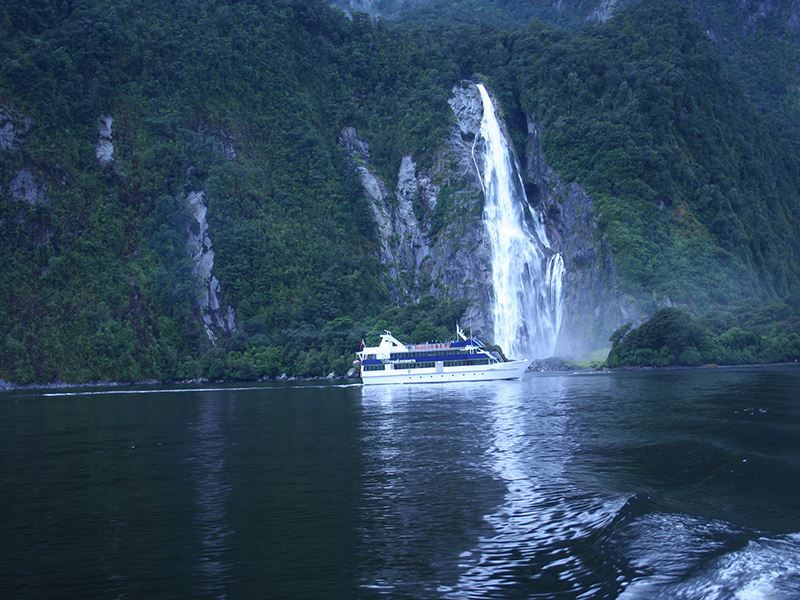 Queenstown is the ‘Adventure Capital of the World’, which is quite a boast but it’s hard to think of a dangerous, thrilling, terrifying activity that is not on offer. We settled on a round of golf followed by an hour in an indoor hot pool with a window open to the stars and a glass of wine. Queenstown, inevitably, has a beautiful setting with mountains, a lake and a lively town.

I thought walking up to the base of the Franz Joseph Glacier was the most exciting of all as I’d never seen anything like this before.  Then we decided to take the helicopter trip on to the glacier. The views were unique and when we landed and walked around the snow it was hard to take it all in.  The helicopter pilot stood around, for him just one of his many journeys each day, each week, while we walked around just thinking, ‘Wow’. 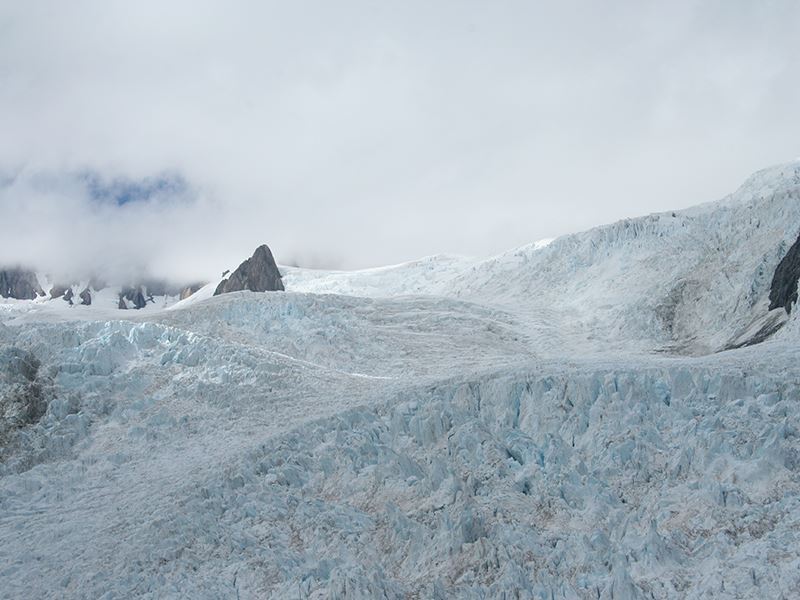 Our trip was planned for us and couldn’t have gone better. The driving times were perfect, the accommodation excellent and the places visited superb.  New Zealand has a unique charm and beauty that rarely fails to appeal to travellers. The country often seems to remind people of a golden age from their past.  The scenery is reminiscent of parts of Britain but has greater extremes of topography: bluer lakes, higher mountains, wider vistas.  Driving is easy on empty roads.  The country has a slow pace of life and people who are laid back, friendly and less brash than their neighbours.  It is these features of the New Zealand culture that crept up on us, as the holiday trip unravelled, and has stayed with us every bit as much as the amazing scenery.

We would like to thank Nigel & Dorothy for sharing  their story with us and hope to welcome you on another holiday soon..